An updated version of this post is at: https://inventorsoftomorrow.com/2017/05/03/skeletons-2/

After completing a Simple Machines unit in our Inventors class, we wanted to shift gears and do a unit on Biology. Since our first class fell on Halloween, what better to start with than the skeleton, bones, and joints?

Key concepts: The skeleton creates a structure for our body.
1) Having long, strong bones helps us to stand up and to carry things.
2) Our skull and ribcage help to protect our fragile organs.
3) Our joints allow us flexibility.

We don’t present these concepts to the children at the start of class. We first present them with activities to explore hands-on so they can discover some ideas and make connections on their own. (See my last post on class structure.)

So, in this post, I’ll first share our activities with you, then at the end, I’ll talk about how we discuss these concepts during opening circle and closing circle.

Pasta skeletons: We had drawings of simple stick figures, glue, and pasta (penne, elbow macaroni and bow ties). You can see some of the results on the right. We discovered it would have been better to do these on cardboard, or at least cardstock, as the pasta is very heavy, and it’s hard to carry a piece of paper with pasta glued all over it. Instead of doing the stick figures, another option would be to have pictures of various skeletons or x-rays (snakes, dogs, people) and let children design whichever skeleton they want.

Hand x-rays: We had black paper hands, Q-tips we’d cut into halves, and glue. Children glued on bones. We had a sample out for people to copy, but it would be even better to have an x-ray of a hand so children really saw what they were creating. 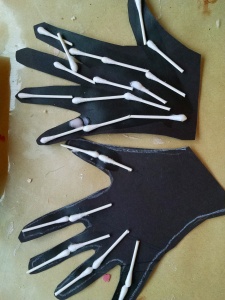 Almost Unschoolers has a fun idea of helping the children feel where the bones are on their hands, then painting along the bones, then pressing their hand onto the black paper, making a handprint of their bones that looks a lot like an x-ray.

Build skeletons to support a salt dough body: The idea was: Using salt dough and toothpicks (you could also use wooden coffee stirrers cut short), build a skeleton, then build the body on top of it. Children used the materials in a wide variety of ways. 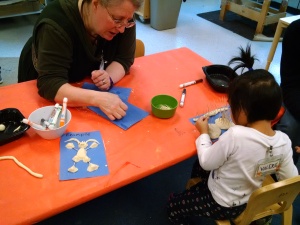 Skeleton: We printed the skeleton found here: http://www.gamescraftscoloring.com/crafts/halloween_skeleton.htm then laminated it and cut it apart. Children could assemble it.

Sorting: We put out two dishes labeled skeleton and exoskeleton, and a collection of plastic mammals and insects and had the children sort them. 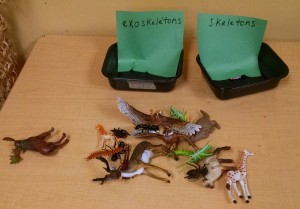 Science experiment: We considered trying to dissolve chicken bones in Coca-Cola (search online for more discussion of this, or just look at one kids’ experiment. But, we were concerned about health issues of raw chicken bones.

There’s also the experiment of dissolving an egg shell in vinegar. The idea behind both of these experiments is that acidic things (coke, vinegar) dissolve calcium. Here’s a great description of how to do a week-long experiment with this with your kids at home.

In class, we knew we wouldn’t see the full effects in a couple hours of class, but wanted to introduce the idea, so we had egg shells, vinegar, and pipettes and eye droppers. The kids placed eggshells in a cup and dripped vinegar on them. In the morning class, the vinegar fizzed all around the eggshells, so you could see a reaction happening. For some strange reason, in the afternoon class, we got no reaction at all… But the kids still enjoyed playing with pipettes and eye droppers.

Books: As always, we get several books from the library to put on the shelf, but only read a few of them in class. Here are some of this week’s books:

I’d had a book on hold from the library which didn’t arrive on time, and it’s a shame, because I like it better than any of those books. Dem Bones

by Barner has great illustrations, and the words of the song, but it also has information about each of the bones, like it talks about how the ankle bone helps us bend, flex, and climb stairs. Next year, I plan to use it in closing circles where we can have the children move and test their bones and joints as it talks about them and then when we’re done, sing the song. Note, the lyrics in the book end with the traditional “Hear the Word of the Lord”. If that’s not appropriate for your setting, you can adapt to “Doing the Skeleton Dance.” 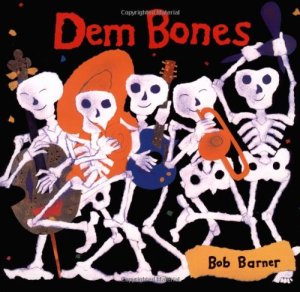 ZOOB: We had a construction toy out, called ZOOB

. (I have to say that if I was buying construction toys for home and had limited space and budget, these would not be my first choice construction toy, as I find they’ve got some big limitations on what you can do with them. But, if your child already has lots of experience with other building toys, these offer an intriguing new set of challenges.)  But it was great for today, because the connections are basically balls that pop into sockets – somewhat like a ball joint – like our shoulders and hips.

Block play: We had wooden artist’s manikins (see below) and encouraged kids to build houses for them.

What are bones? Especially for our little ones (age 2.5 – 4) we needed to ground them in what bones are and what a skeleton is. (I asked during little kids’ circle: “who here has a skeleton?” and one child raised her hand.) You can have them touch their cheek and feel how soft it is, then touch their jawbone or cheekbone and ask them to notice how hard it is. (If you have a skull model or picture of a skull, point out these bones.) Then have them feel their arms or hands and notice more bones.

Why are bones helpful? Talk about it, but also show it. One way to demo concept # 1 is to fill one glove with water or flour, and another glove with a “bony” hand made of popsicle sticks, and with water or flour. (As shown in this post on Pink and Green Mama.) I made our bony hand with a jar lid and five short colored pencils taped on, then filled with kinetic sand. They can explore how floppy and useless the boneless hand is, then feel how sturdy the hand with “bones” is. Have them try holding a small book (or a wooden block) with the floppy fingers – the book falls to the ground. Now hold it with the firm fingers. 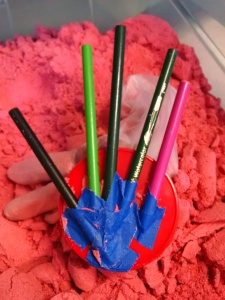 How do bones protect us? You can talk about how the rib cage protects the heart and lungs, and the skull protects the brain (concept #2). We didn’t cover this specifically, but I bet you could do something with inflated balloons as the lungs. Have them blow air into a balloon (like the balloon is taking a deep breath). Easy, right? But what if you were out working, and something heavy fell on your chest? (Now lay a hand on the balloon, squishing it flat, and ask them to blow it up again. (Have the balloon take a breath.) It can’t inflate. Then protect the balloon inside a box or something to represent the ribcage. Now put the hand on the box… the box stays firm, the balloon isn’t squished… you can blow it up.

Note: After I wrote that, I noticed that in the Pink and Green Mama post I linked to above, she gives this intriguing, but low in detail description of how she explained this concept: “We saw how our lungs fill up with air and are protected by a ribcage. We saw how helmets protect our brains and heads. And we smashed stuff. Lots of balloons and also a giant ice alien brain.”

We did talk with the kids about exoskeletons, and how insects and crabs have their hard skeletons on the outside to protect their soft squishy insides. If we had more time on this, we could also talk about armor as special protection humans made and wore and how that’s like an exoskeleton.

We first talked about all the things we had discovered and explored about bones and skeletons during discovery time, opening circle, and tinkering time. Then we added a new concept: joints.

How do joints help us? Go back to your hand made of pencils and sand/flour. It can hold up a book or a block. But, can it pick up a small object (like a cheerio)? No, because it has no joints. To help them further understand why joints matter, take long poster tubes or wrapping paper tubes, and slide them over the child’s arm (as shown in this post on Growing Little Scientists, which also has LOTS of other great ideas about teaching bones and joints). This locks their elbow joint straight. Now have them try to scratch their head.

If you’ve already talked about simple machines, and did the activity showing how the arm is a lever, you might remind them of that.

We had several wooden artists’ manikins, so we passed them around for kids to explore. I encouraged them to notice: how does the manikin’s elbow bend? Is this like your elbow? How does its shoulder move? Is this like your shoulder? Is it like the Zoob toys we played with? Then I posed a manikin and asked them to do the same thing with their body that the manikin was doing (lift one arm up, put both hands forward). Then we did it the other way… I did a motion and asked them to copy it with the manikin.

We then sang Dry Bones as a fun wrap-up to the day.