[An updated version of this post is at https://inventorsoftomorrow.com/2016/12/22/chemical-reactions-for-kids/]

In our last session, we covered Mixtures and Solutions. This class was all about Reactions. One of the great things about most of these experiments is that they’re really easy for parents to re-create at home with inexpensive materials you probably already have in the cabinet.

Some of the reactions are quick and dramatic, others are more slow and subtle and require a little patience to observe. Before you start experimenting, you may want to do a very brief explanation of reactions: “we’ll mix two or more ingredients together, then we sit back and watch and see what happens. Sometimes something happens right away – sometimes we’ll have to count to ten and see what happens.”

What’s the Big Idea: When some chemicals are mixed together, they “react” and the substance changes in some way. That’s the fundamental idea we’re hoping that our 3 and 4 year old students grasp.

As you might guess, we’re going to use lots of acid and base reactions in this class – vinegar and baking soda, lemon juice and baking soda, lemon juice and milk, etc. If you have 6 and 7 year old students you can explain more about why those react. There are lots of ways to explain this (see some here on the UCSB Science Line). You might say “vinegar and baking soda both have energy they don’t want and they can help each other get rid of it. Vinegar is an acid and it wants to give away a proton. Baking soda is a base, and it wants a proton. When they meet, the baking soda grabs the proton, and then they release a water molecule and some carbon dioxide gas, which makes the bubbles.”

Question of the Week: What are the signs of a chemical reaction? Answer: Some examples are – the color changes, there’s a different smell. there’s a change in shape or texture, a change in temperature (it becomes warm or cold), the substance makes sounds, or it starts giving off light.

You can use baking soda and vinegar as your example: When these are mixed, they produce foaming bubbles (and carbon dioxide gas) and also make a fizzy sound. If you mix them in a plastic bag, and seal it, the children can also notice that it is an endothermic reaction – the mixture gets colder as it reacts.

A Jar of Bubbling Goo (Vinegar, Baking Soda, and Oil): This is really cheap and simple, yet really dramatic – check out the video at the top of this post! Some of our students loved this so much they wanted to do it over and over. It requires some advance preparation of making baking soda ice cubes: Use water, baking soda and blue food coloring to make a thin paste. Freeze in ice cube trays.

At class: Pour into a jar one inch of white vinegar, two inches of vegetable oil, and a few drops of yellow or red food coloring. Point out that the oil and vinegar don’t mix – this is a flashback to last week’s class when we learned water and oil don’t mix. Then drop in a baking soda ice cube. Sit back and observe. As the baking soda and vinegar react, they release lots of bubbles. Note: you can set a lid on top of the jar but don’t screw it down – you want the gas to be able to escape, not build up pressure. 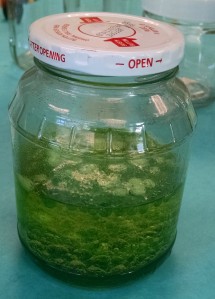 “Lava Lamps” Another bubbling bottle activity we didn’t do in class is to pour oil, water, and food coloring into a jar or water bottle. (Like the “Fireworks in a Jar” activity mentioned in last week’s post.) Then add an alka seltzer tablet. Here’s how Steve Spangler describes the science of what happens: “the Alka-Seltzer tablet reacts with the water to make tiny bubbles of carbon dioxide. These bubbles attach themselves to the blobs of colored water and cause them to float to the surface. When the bubbles pop, the color blobs sink back to the bottom of the bottle.” It’s infinitely re-useable. Any time you want more bubbles, just add another Alka-Seltzer. If you don’t have Alka-Seltzer, Hands On As We Grow says salt works too. To find pictures of this in action, search for “lava lamp science project.”

Fizzing Powder: Fill a shallow tray with baking soda. Then mix liquid watercolors with vinegar. Let the children use pipettes, eye droppers, turkey baster, or spray bottles to drip colored vinegar on the baking soda and watch it fizz. (Note: we tried taking coffee filter prints of the product, but it wasn’t a very interesting art project, so we decided to just leave it as the basic tray of fizzy powder activity.) See more pictures of this at Hands on as we grow and Creatively Blooming. 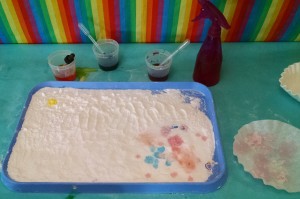 Self-Inflating Balloon – Blow up a balloon with a chemical reaction.

You could try this experiment with other liquids. What happens if you put water in the bottle instead of vinegar? [Nothing.] What if you use lemon juice? What if you add detergent or bubble solution to the vinegar? [You end up with a balloon full of bubbles…]

There’s a great description of the science of this experiment on the Science Club website: http://www.webinnate.co.uk/science/week2.htm.

Extension: you could see what happens if you “turn this around”: put baking soda in the balloon, use a pipette to squirt vinegar into the balloon, then hold the balloon closed.

Sensory Tub – Erupting Lemons: Partially core a lemon. Sprinkle some baking soda into it. It will produce a fizzy mini-eruption. If you want more reaction, squeeze the lemon to release more juice, or add more baking soda. 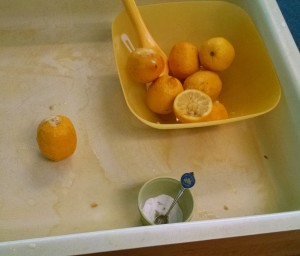 Art Activity: We reprised “Milk Fireworks” from last week just because it’s so fun and easy and we had leftover milk. I wish I’d found this post on Babble Dabble Do before class: it talks about how to make marbled paper with the milk fireworks.

Glitter Volcano: If you have a child who loves pink and sparkly things, then get the prettiest clear bottle you can find. Put in baking soda, then just a little red food coloring, then some pink or silver glitter. Then add vinegar. It’s a pretty and sparkly chemistry experiment. (Source: Geeks Raising Geeks.)

Big Motor Activity / Snack Prep – Make Ice Cream. Mix 1 cup of whipping cream, 1 cup of half and half, 1 tsp vanilla and ¼ – ½ cup sugar. Put in a small container with an airtight lid. (If it’s not watertight, seal with tape.) Put it inside a bigger round container (like a coffee can.) Fill the large container with layers of ice and rock salt. Roll the can back and forth between students (or up and down a slide) for about 15 minutes till ice cream hardens. Then eat it! (You can also make ice cream in Ziploc bags – see our directions in the States of Matter post.)

We explained the big idea and discussed the question of the week, discussed at the top of this post. We didn’t have a song of the week, because we didn’t find any good songs on chemistry reactions – if anyone knows of one, let me know!

Recommended Books. As with last week, we found it challenging to find many kids’ books about chemistry. Here is the one we used.

Group Parachute Game: Endothermic and Exothermic Reactions: Have all students stand in a circle and hold onto a parachute. Toss some balls in the middle: One person flicks a spinner with red or blue spaces. If it comes up red, students imitate a ‘hot’ excited exothermic reaction with balls bouncing up and down, if it comes up blue, they imitate a cold endothermic reaction by slowly rolling the balls around the center.

We’ve noticed that kids tend to engage more with an experiment if it has a good name. For example, the “Egg Drop Challenge” is more likely to engage than saying “over at that station, you’ll make a container to protect an egg, and then try dropping it.” The “Dino Dig” is better than “go rummage through that shredded paper and find the plastic dinosaurs.” This week, we were calling the vinegar, oil, and baking soda ice cube experiment  “Fireworks in a Jar” and the kids were very excited by that name, and were talking about it over and over. “Erupting Lemons” was also exciting.

So, I’m thinking about names, and they’re tricky sometimes. For example, if you say to any American over the age of 10 “I made a volcano in science class”, they all know that you mean you did a baking soda and vinegar reaction. Maybe in a papier-mâché volcano, but maybe just in a dish. But when you think about it, it’s probably not right to call a baking soda and vinegar reaction a volcano, since it really has nothing at all to do with the hot lava and volcanic ash that comes from a volcano.

After we spent the day calling our experiment “Fireworks in a Jar”, I discovered that online, lots of people use that term to describe an experiment I added to last week’s post on Chemistry Solutions that is water, oil, and food coloring that sinks through the layer of oil and diffuses in the water, looking more like fireworks than our bubbling experiment did. So, I thought of changing the name to Lava Lamps, but discovered that online, that’s usually used to describe an experiment with oil, water, and Alka-Seltzer (see above). I thought about using the word magma, because the red jar at the end of the video reminded me of magma. Or, even better, Magma Mines, which is the name of one of my son’s favorite levels in Mario Party. But, again, that would be scientifically inaccurate, since bubbling vinegar, oil and baking soda have no relation to molten rock. Can’t call it Boiling Bubbles either, because it’s cold, not hot. So, I’ve settled for now on “A Jar of Bubbling Goo.”

Over time, I’m hoping to go back through old posts, and think of good names for all our experiments, because it definitely makes a difference in how “fun” the kids perceive the experiment will be.