On Sunday, our Inventors’ Lab class did a field trip to the Adventure Playground on Mercer Island, WA. (Learn all about it here: https://gooddayswithkids.com/2016/08/28/adventure-playground/)

We were last there on August 18, so we had the chance to compare… When kids are allowed to freely dismantle and re-build and add to the existing structures, what changes over the course of the month?

Last month, we worked a lot on adding a handrail to a “bridge” that was just one 8-inch wide, 8-foot long plank 4 feet off the ground, and on building a swing. (Learn about those processes here: https://gooddayswithkids.com/2016/08/28/problem-solving/)

When we arrived this time, our swing was long gone. The long branch we used for a handrail had been sawed in half. Part of the handrail was still there, although the rope had slipped, so it was no longer tied up at handrail lever. But, a handrail was no longer really needed, because where that single plank bridge had been, there was now a wide plywood platform and a ladder that had been laid horizontal to form a bridge. 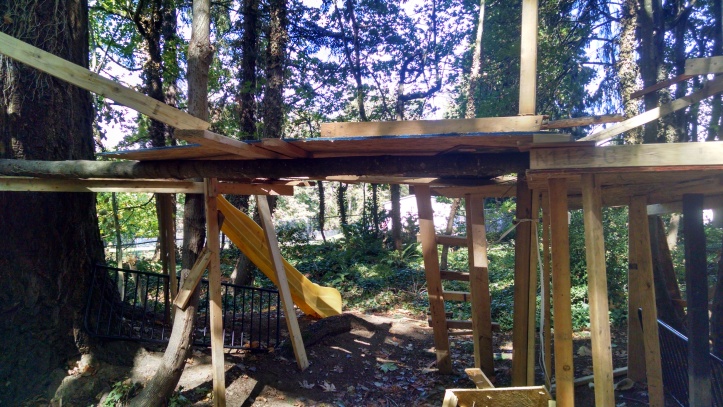 “Our” platform had also gained a cool climbing wall, another ladder, some metal railings underneath, and a slide.

That yellow slide may look familiar… In our last visit, we’d seen it attached to one rickety platform, and observed a child take it off that platform and move it somewhere more stable (platform #2), and now it had moved on to platform #3.

Platform #2 had also changed – it had lost one whole section, plus a step on a high ladder – I think it had been cannibalized for other projects.

Building at the Adventure Playground in the short-term can be about creating a “product”. Deciding to build a swing and working hard till it’s done, and then having the great satisfaction that comes from creating that product. But, over time, the playground is definitely about Process – it continuously evolves and changes, as each child brings in their own ideas and creates their own plan.

Yesterday, we were there and building for two hours, but ended up not leaving a product behind. My husband set the ambitious goal of building a bridge between two platforms that were about 20 feet apart with just one tree between them for vertical support. We worked and worked, and had a connecting bridge.

But we simply couldn’t find a way to stabilize it enough. If a child had tried to cross it, it might have been OK…. or it might have collapsed. We didn’t feel it was safe or responsible to leave it there. So, in the end, our last ten minutes there was about tearing down everything we’d built over the last few hours. Our son was a little disappointed that we weren’t leaving a mark behind this time, but was easily cheered by the promise of potato chips in the car as a reward for all our work.

Note for 2019 – the adventure playground will not be open this year, but they are offering an Adventure Playground Summer Camp!