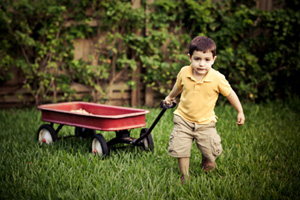 Amongst the Next Generation Science Standards for kindergarten is K-PS2 Motion and Stability: Forces and Interactions. Here is the text for that standard:

K-PS2-1: Plan and conduct an investigation to compare the effects of different strengths or different directions of pushes and pulls on the motion of an object.

K-PS2-2: Analyze data to determine if a design solution works as intended to change the speed or direction of an object with a push or a pull.

These are the Disciplinary Core Ideas:

The way I structure a science lesson is to first have “discovery time”. I put out multiple activities that allow them to experience the science first. Then I do the formal teaching of the concept and vocabulary. Then, I offer “tinkering time” where they get to explore the idea again, reinforcing the theory they’ve just been taught with the concrete hands-on experience that helps them to understand it and remember it.

We have taught Force as part of our Simple Machines unit, and we have also taught it in conjunction with Gravity and Magnets. Here are a collection of ideas for teaching Force.

For K-PS2-1: compare the effects of different strengths or different directions of pushes and pulls on the motion of an object

Note: although this standard explicitly says that “assessment does not include non-contact pushes or pulls such as those produced by magnets”, when we teach Force in our magnets class, we do demonstrate and play with these non-contact pushes and pulls. Children as young as 3 are easily able to grasp the idea of pushing and pulling with magnets.

For K-PS2-2: Analyze data to determine if a design solution works as intended to change the speed or direction of an object with a push or a pull.

Note: although the standard says “assessment does not include friction as a mechanism for change in speed”, we do end up discussing friction during our Simple Machines unit. We cover it when talking about Wheels and Axles. Our 3-4 years olds experience friction but can’t articulate an understanding of it, but our 5 year olds certainly can.

If you’re teaching force as part of a simple machines unit, you want to convey that all simple machines transfer force. They may change the direction and/or the strength of the force. Most simple machines make things easier by allowing you to use less force to do the same amount of work.

There’s a lot you could do with learning the vocabulary of positions and direction of movement: play games where you ask kids to go behind, above, into, and so on; read books and ask them to describe the positions in the pictures; play Simon Says – “run away from the wall,” “run toward the swings”, “run around the tree.” Give each child a toy, and have them place it in front of them, then behind them, above, etc. Shake the shaker above your head, behind your back, and so on.

Challenge kids to push a wide variety of objects, including some they will not be able to push – a desk that is too heavy for them to move, or a tree that is rooted to the ground. Ask them to make observations about why it won’t move.

I love starting with this idea from Mrs. Meyer’s Kindergarten: Brainstorm all the different ways kids can move: jump, roll, run, fall, etc. Then put out a bucket of items and ask the kids: can those things move by themselves? Kids quickly say that no, those things need help to move. Ask how they would move them: push, pull, throw, drop, etc. Tell them that when we push or pull on something to move it, we are using “force.”

Then ask them “What if it’s really icky, and I want to move it, but I don’t want to touch it?” Talk them through helping you find a stick to push it with, or another solution.

Ask what the difference is between push and pull – push moves an object away from you (where the force is being exerted) and pull brings it toward you.

Sing a song, or read a book.

Try this Push and Pull song to the tune of Row Your Boat… it starts Push, push, push your cart, gently through the store. Fill it full with lots of things, then let’s add some more.

And Everyone Shouted, “Pull!” by Claire Llewellyn. Described as a ‘first look at forces and motion’, this is a great read-aloud for ages 3 to 5. It engages them in the story of animals trying to get items to market, and loading up and pulling the wagon.

by Mayer. Best for ages 5 – 6. An engaging read, with rhyming text story of a boy’s day with his dog Newton. “The ball won’t roll far in the rough, grassy yard. It rolls much farther on a surface that’s smooth and hard. But it won’t roll at all if I don’t give it a push. When I pushed too hard, it rolled as far as the bush.” Covers Newton’s first and second laws of motion. The back of the book has ideas to explore: “What are some things you can do to help a ball roll fast and far?”

Move It!: Motion, Forces and You

Give It a Push! Give It a Pull!: A Look at Forces by Boothroyd. For ages 4 – 6. The text is quite good – the graphic design a little cluttery. The big picture ideas it addresses are: A force is a push or a pull. Sometimes the cause of a force is invisible [wind, gravity, magnets]

. Forces put things in motion. Stronger forces can make things move farther or faster. Friction is a force that slows things down. Force can change the shape of things.

by Bradley and Motion: Push and Pull, Fast and Slow (Amazing Science)

Here are other books that are recommended for teaching force:

There is a great full curriculum on forces and motion for kindergarteners at http://www.mccracken.kyschools.us/Downloads/PUSHES%20and%20PULLS%20-K.pdf