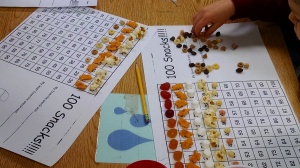 Today was my son’s hundredth day of kindergarten, so the teacher had all sorts of celebrations planned. I helped with the snack counting project, which was a great hands-on math experience. Parents had been asked to donate items. The teacher set out bowls of ten different kinds of snack items (kix cereal, bunny crackers, chocolate chips, etc.)

First, the children had to stand in line.

They each took turns taking 10 items from the first bowl and putting them in a cup, then ten from the second, and so on. As simple as this activity seems to an adult, the fact is that these kids could not have done this successfully 100 class-days ago.

In that time, they’ve learned the social skills needed to stand in line, wait their turn, and not crowd the other kids. They’ve learned enough impulse control that 18 of the kids managed to do this task without eating any of the items. (One child ate some… I told him not to eat more… he ate more…) Their small motor skills have grown to the point that doing the pincer grasp needed to pick up these small items came easy to almost all. The only challenge was the raisins, which like to stick to each other.

They’ve all learned the counting skills to consistently and reliably count out exactly ten items. And even if they had kids on both sides of them who were verbally counting to ten, they were able to stay focused on their own counting. Virtually no one under-counted. Only a few over-counted or accidentally took a few extras. One child I over-heard counting “9 – 10 – 11 – 12 – 13…. oops, that’s too many. I need to put back 1 – 2 – 3, right?” There is one child who is prone to rushing all of his work, and thus getting sloppy, and he did that here, not counting carefully. I pointed it out to him, but didn’t make a big deal of it, as I knew it would reveal itself to him in the next stage of the process.

Once they had their cups, with ten each of ten snacks, we went back to our work table. They had sheets with 100 numbers on them. I told them that they should cover each number with one snack item – this is great reinforcement of one-to-one correspondence – a vital math concept most of them didn’t have 100 class-days ago.

I suggested that they do a pattern – maybe all of the popcorn in one row, then marshmallows in the next, or whatever they wanted to do. Here’s the results for my first group of six kids:

One child intentionally placed them randomly, saying that he did

One child placed them with a great deal of intention and thought.

But if there was a pattern, I couldn’t discern it. I asked her what the pattern was – she just smiled a mischievous grin. One of the other children noticed that the bunnies were in an almost diagonal pattern, but then they decided it wasn’t a full pattern. I asked her why she arranged them that way, and she said it’s where they looked the best.

Three children built horizontal rows – putting ten items across the top row, then moving on to row two, and so on down. 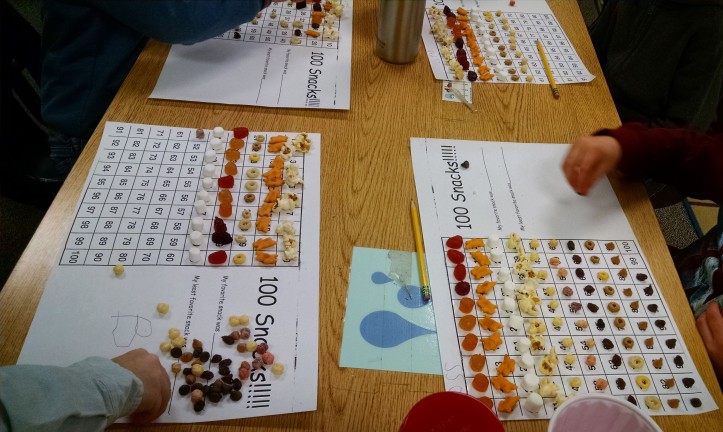 One child started by placing one of each item across the bottom row of his chart, so that row had a representative of each food type, then building up the columns from there, till he had all the food sorted into columns.

One snack was plain Kix cereal, and one was Berry Berry Kix. This was tricky, because the plain Kix is plain beige. The Berry Kix are three colors, but one of them is a just slightly pinkish beige. It was easy for kids to mistake if for plain Kix. This required some extra attention to detail to sort out these two items.

Checking their Math and Problem-Solving

As each child finished their sorting, I would ask them to double-check: were all numbers covered? Did each number box have exactly one food item in it? We made minor adjustments as needed. We’d run out of Cheerios at the end, and the last child to go through the line was one Cheerio short, but luckily another child at the table discovered she’d accidentally taken 11 Cheerios, so she shared one.

One child had two open slots in her butterscotch chip row, so we re-counted them and saw that she had only taken 8 so she got two more from the bowl. One thought she had an extra piece of popcorn, but after discussion, we decided that a small piece had broken off of one of the larger pieces of popcorn. Multiple kids had a few extra raisins (some had stuck together). One decided to add an extra 101 box to his chart for that extra raisin.

I asked all the kids: If you have ten sets of ten snacks, how many snacks do you have? They all really grasped today that 10 sets of 10 equals 100.

Once the snacks were all sorted, it was time for the reward: eating all the snacks! (Those they didn’t eat now were bagged up for later.)

We had 20 minutes for each small group to do this. It wasn’t quite enough. In each group, a couple of the kids were able to complete their chart and eat some snack, a couple kids were mostly done with the chart, and one child was nowhere near done. We had one child (my child, of course) melt-down when this happened. He really wanted to finish his chart and had a really hard time recovering from needing to stop part way through his time.

This was such a great milestone project – they were really able to use a lot of the skills they had developed over the past 100 days and be successful at this new challenge, which reinforced lots of key math ideas, and was a fun memorable way to celebrate day 100. There’s a lot of ways you could adapt this idea for multiplication themed activities. For example, if you were working on multiplying by 7, you could start with seven sets of 7. Then they eat one type of food. Then do six sets of 7. And so on…

If you like this post about observing kids’ learning process with math, check out the blog Talking Math with Your Kids.