There are several foundational math skills that are core to an understanding of math. One is the idea that a number symbol can be used to represent a number of objects. The digit 5 is a way to describe 5 books or 5 balls. 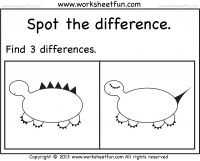 After age 3 or so, start working on actual numbers, working first on 1 – 5. The more places they encounter the symbols where they have meaning the better.

Wait till they’ve really mastered 1 – 5 before you do more. When we rush them, they don’t fully internalize information. Being patient now will give them a richer understanding for their future. Once they’ve mastered that, keep doing similar techniques, just with more numbers. First, from 1-10, then 1 – 20, then 1-100. And so on.

Image credit: From hess-tatong-apple.blogspot.com, marked as free to share and use.