Mars Rovers in the Sensory Table

In our Family Inventors class, we do a unit on Space Travel and the Planets of the Solar System.

It may seem hard to come up with good hands-on activities about these vast celestial bodies. But, over the past few years, we’ve developed lots of fun ideas: read about our solar system theme here, with plenty of hands-on science activities for kids in preschool and elementary.)

This year, we added a sensory table activity where the kids drive around toy rovers in the sand (which any 3 – 6 year old can enjoy!), then learn about space missions that have landed rovers on the moon and on Mars.

You could just put in toy cars with good treads to leave marks, and pretend they’re rovers. Kids will have a great time driving around in the sand. But it’s even better if you have toy rovers! Here are the ones we used – click on any picture for a larger image:

which includes for the lunar lander, lunar rover, and a command module. These are “kits” which require just a little assembly. (You click together parts of the lander, then screw it together, and you slip the antenna and the satellite dish into the rover.)

. (Note: for a 3 or 4 year old, I might just get 1 or more Curiosity rovers. Curiosity is much sturdier than the other two. I’m a little worried about how durable Sojourner will be.)

which includes a Sojourner rover, the lander, and a Mars Pathfinder, which is the spacecraft that carried the rover and the lander to Mars. (See more details about this one at the bottom of the post – it’s really cool!!)

which has ten small toys, including a lunar rover – but I assume the wheels on the rover don’t turn. The Lego Lunar Rover

Or, if you want a bigger toy to use in an outdoor sandbox, check out these options: Miles From Tomorrowland Mission Rover

(Note: none of these three recreate ACTUAL space vehicles.) 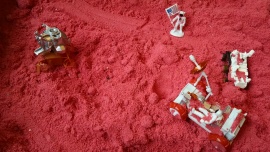 Fill the table (or a plastic bin) with play sand or another material.

We thought it would be fun to use red Kinetic Sand

for “the surface of Mars”, but you can see in this picture that the sand just packed into all the little crevices in the toys, making it hard to even see what it was you were playing with. I’m not sure if Space Sand would do the same thing.

The Basic Science – What Is a Rover?

A rover is a vehicle that drives on the surface of a moon or other planet. The lunar rover was a “car” that was driven by astronauts. The other rovers are robotic vehicles. They are piloted remotely by human beings on earth. They gather photographs, gather data through sensors (e.g. temperature and wind sensors), or gather and analyze rocks and soil. They are launched from earth into space on rockets.

I made a poster to hang next to the sensory table, so parents and teachers could talk to the kids about what the vehicles and the sand were meant to represent. I used this illustration from Historic Spacecraft.com, and added some of this text. (You can download a free printable PDF: rovers for kids.)

Astronauts used it to drive around moon to explore and collect samples. Rovers were driven a maximum of 22 miles, never more than 5 miles away from the lunar module (in case it broke down and they needed to walk back.) Check out a great picture of the lunar rover.  More about lunar rovers. Design Squad has a fun DIY project to build a lunar rover from cardboard. (Or really, the directions would work fine for a “build a car” challenge too.)

They were designed to support Soviet manned moon missions, but they were cancelled. Instead used to explore Moon—sent back 100,000 TV images, almost 300 panorama images, and soil analyses. One traveled 24 miles. Learn more about the Soviet Union Lunar Rovers.

Sent back 17,000 images and data on rocks, soil, wind, and weather. Traveled 100 meters over 3 months. Here are 360 degree images from Sojourner. More info on Pathfinder Mission and Sojourner.

Spirit 2004—2010 and Opportunity—2004—present. Study rocks and soils, search for signs of water and signs of life. Opportunity has traveled 28 miles over 14 years. Here are images from the rovers’ cameras and an overview of the mission of the Mars Exploration Rovers. And here is the photo from Opportunity’s 5000th day on Mars.

The Curiosity Rover has been active on Mars since August 2012. Studying Martian climate, geology, searching for water and signs Mars ever supported life. Here’s a video of Curiosity’s first four years on Mars. There are two great websites on Curiosity, at JPL and NASA.

I also found three other great posters about the Curiosity rover. I printed copies of these on 11×17 paper to post in the room. Click on any image for a high resolution version at its original source.

How to Drive a Rover on Mars

There is a NASA app to “drive the Mars Rover” and your kid will happily play it. But it’s important to clarify that it does NOT represent the real process, which is that once a day, engineers upload a day’s worth of commands to the rover. Here’s a brief kid-friendly video that explains the reality of how NASA engineers drive the Mars Rover Curiosity, which is 150 million miles away on the surface of Mars. (Here’s an article with more details, including a video of footage from the rover.) There is a two replicas of the rover in the Mars Yard at JPL in California, an area the size of two tennis courts, strewn with sand and boulders where drivers can test things out. This article on the Mars Yard and the logistics of synching up timing for sending commands to Mars, which has a  day that’s 24 hours and 40 minutes long, tells more about the logistics.

Books about the Mars Rovers

Mars Rover Rescue. by Rader, who works for SpaceX and hopes to be a real life Mars Explorer. Age 4 – 8. A good introduction to space science AND an alphabet book.

You Are the First Kid on Mars

By Carney. Age 7 – 9. A National Geographic book with great photos.

by Siy. About Spirit and Opportunity and The Mighty Mars Rovers

by Rusch. Amazon says age 8 – 12 for Siy’s book, and age 10 – 12 for Rusch, but there’s a LOT of content in these books – about what I’d expect an adult space geek to want to read! Cover how a team of engineers designed, built, and sent a rover to Mars. Siy has a focus on Steven Squyres, lead scientist, which starts with images of him as a boy with a telescope. Nice for readers to be able to identify with a kid who grows up to do cool science.

If you’re looking for a great science themed gift for a 5 or 6 year old, a fun gift pack would be a Hot Wheels Mars rover and one of the first 2 books!

OK, this was cool at first glance, but the more you look, the better it gets.

The solar panels on the lander fold up. (On left.) Take the heat shield off the capsule of the Pathfinder, and you’ll find a smaller scale version of the lander!! (I wish they were the same color, but that’s a nitpick.)

Open up the solar panels on the mini lander and the regular lander… notice that they have smaller scale versions of the rover on them!! (On the left hand solar panel in these pictures. Look for the blue rectangle – you can click on the picture to see a larger image.)

Even better, the medium size rover can be taken out of the lander! Here’s a side view of both of them… notice how the big rovers wheels can either roll flat on the table, or bend to go over obstacles.

I thought I’d figured out all the features until I noticed the reference on the packaging to the movable antenna. Here it is:

Such a cool science toy for young space fans! Downsides: I worry that it’s fragile. If I was giving this to a 4 or 5 year old, I’d only give them the rover (with the antenna down) and I’d tell them to play gently with it so they didn’t damage the articulated wheels. With a 6 or 7 year old, I’d show them all the other parts, but encourage them to keep the mini rover attached at all times (it’s about the size of a mini SD card, so easy to lose.) Also, these were released in 1997. Right now there’s several for sale on Amazon for around $20 with shipping. But I can’t promise long-term availability.

For more hands-on science activities for kids, just click on the category of your choice, and start exploring!