For our Dinosaurs class, in the past, we’ve done fossil impressions, where they push a shell or fossil into clay and see the imprint it leaves. 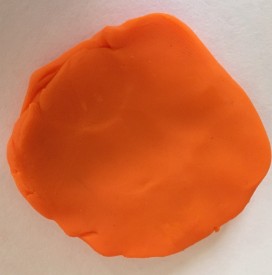 This year, I was hoping to be able to make a casting. You can do this with plaster but plaster is messy and a lot of work. I read that you could do it with glue. I hoped that hot glue guns would work, because then they would harden right away, and it would be a chance to train our kids in using hot glue guns were they’d just get to practice squeezing the trigger on the glue gun and aiming without having to be very precise. 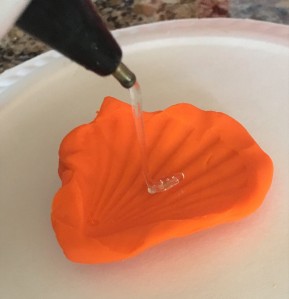 But, the results were lousy – the glue from a low temp hot glue gun comes out in an extruded rope shape, and doesn’t ooze together into a liquid before it hardens as I had hoped it would. 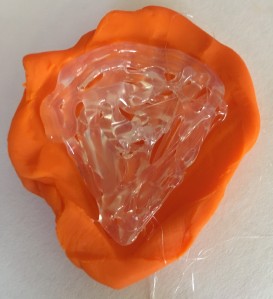 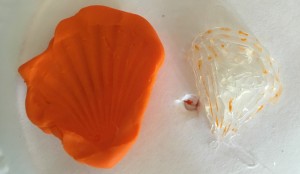 So, I tested it with elmer’s school glue.

And here’s what it looked like on Wednesday morning.

So, these results are fine, but it takes from Sunday to Wednesday to dry. So they would need to do it one week, and the teachers would need to take them home to dry, then the kids would get them back the next week.

The impression of the shell is very deep, so I tried taking some shallow impressions of a cedar branch, a feather and a toy’s footprint in hopes that having a thinner layer of glue would mean they dry faster. The feather didn’t impress well or cast well – the cast kind of looked like a thumbprint. The cedar branch left a nice impression, but in the casting, it’s easier to notice the air bubbles in the glue than the cedar branch shape. The toy footprint was easy to cast and easy to see. 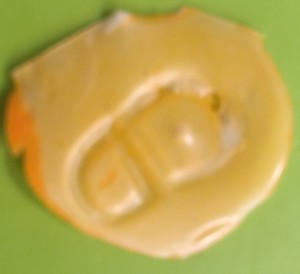 I did this yesterday, and they were dry by today. So, still not a “take home” from class project… but faster, at least.

My question was: are these cool enough results that kids would want them back and want to take them home? Or do I just go back to just doing the impressions as an activity you do in class and don’t take anything home?

What I chose to do: The kids just made impressions in the clay, then rolled up the clay balls and did it again. I made several sample castings and I used them in opening circle as I talked about how fossils were made. I showed how the shell could settle down into the clay at the bottom of a river (pressing the shell into the modelling clay.) Then over time, maybe the shell would wash away (I pulled it out), then the river would carry sand and debris over it and some would settle into the impression of the shell (I squeezed glue into the impression). Then over time, as the river moved away, it would dry out. (I showed them the dry casting of the shell.)

Then I showed them all the castings I had made, and the original objects and had them match them up with each other.