In our Inventors Lab class, we use the book Marvelous Mattie: How Margaret E. Knight Became an Inventor

by McCully when we talk about Inventors and Engineers.

Things I really like about this book: it features a female inventor. It talks about her design process, with illustrations showing the sketches she made (in reality, they’re drawings by the illustrator of the book, except the patent application drawings near the end of the book, which are Knight’s actual drawings). It starts with her as a girl, making toys for her brothers, which helps our students connect with her. She then builds kites that fly higher and sleds that slide faster than the ones the other kids have, goals which our students can relate to.

Then, when she’s a 12 year old girl working in a textile mill, one of her friends is injured when a shuttle flies off a loom and she invents a guard to protect from this happening again – an important invention that is added to every loom in every mill in Manchester, NH. The kids were impressed that a kid could do that. She is then working in a factory that makes paper bags that are folded and pasted shut at one end. But, there were a few problems with these bags. [I took a break from reading and did a demo with a simple flat paper bag I had made – when I set groceries in it, it tips over, it doesn’t stand by itself. When I put in bulky items, it rips.] So, Mattie set about trying to invent a better bag with a flat square bottom. She sketched ideas, then made paper models, then built a wooden prototype… it didn’t work right the first time, so she tinkered with it, and then cranked out thousands of paper bags. [I took out a brown paper lunch bag, and demo’ed how it stands up by itself and doesn’t break so easily. The physical demonstration really helped my students grasp the point.] The book ends saying that we still use this bag design to this day.

Only thing I don’t like… it’s just way too long for a group read-aloud with my age group of 3 – 7 year olds. I re-wrote the story in my own words, printed it and taped it to the back of the book. I read those words as I flipped through the pages to show the pictures. (Note: I did explain to the kids that i had done that, because I knew the kids who can read would notice.) My version had about one third the words that were in the original.

This book is a nice lead-in to talking about the process of inventing or about engineering. The discussion can go something like this:

It’s a book well worth the read. And great to combine with hands-on engineering activities. Check out some of ours in the What’s an Engineer post. 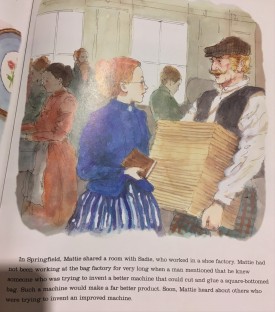 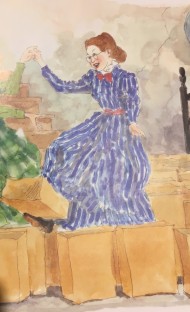 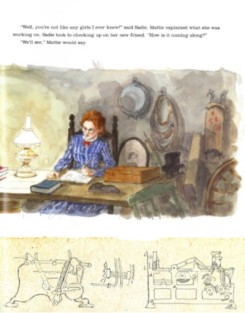 Note: I think there was an error in an illustration in a previous edition of the book. (Though I can’t prove that at this point.) When it talked about how she worked in a factory where they made old-style bags, the illustration showed a flat-bottomed bag! The whole point was that this bag hadn’t yet been invented. The current edition has a man carrying a pile of flat bags, as seen above.