When we study plants (and bugs), we like to have something in the sensory bin that looks like dirt.

Sometimes we’ve used real potting soil – but we’ve had parents complain that potting soil often either has chemicals in it, or if it’s organic, it has manure. And it leaves kids hands dirty.

We’ve used cocoa cloud dough – made with flour, cocoa powder and vegetable oil. It looks like dirt, and it’s harmless to eat. (Although kids are often disappointed if they taste it – it smells like brownies, but without the sugar, it doesn’t taste like them!) See pictures in tunnels week.

We stumbled upon Coconut Coir Fiber.

and we think it’s a great option! Non-toxic, less messy than dirt, easier to wipe off hands than soil, and eco-friendly (it’s a byproduct of the coconut industry. It’s cheap and easy to use and compostable when you’re done.

You can buy a brick of coir. It’s the size of a brick, but when  you soak it in water, it expands to several times its original size – enough for a sensory table. Then you break it up, and it looks like dirt. 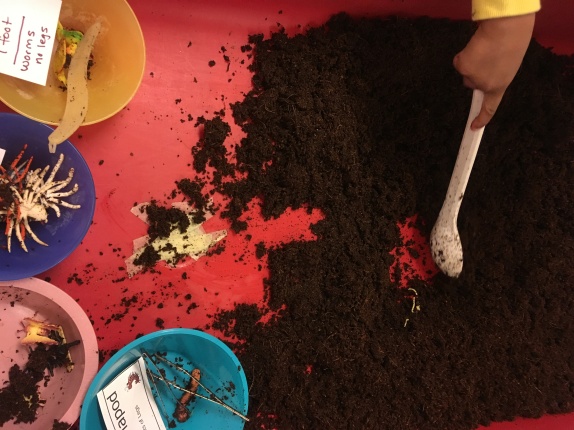 I used Down to Earth brand from our Ace Hardware – I know it works well, but it’s only available on Amazon in LARGE quantities.

One of our other classes tried Grow It Coco Coir Mix, and the results weren’t nearly as nice. It was more powdery and thus less like rich soil in color or texture. And it comes in a bigger quantity than you really need. If you try other brands, let me know what you think in the comments!