Eugene Science Center (formerly called Science Factory) is in Eugene, Oregon, home of the University of Oregon. It’s a fun science museum with lots of hands-on activities, and an excellent planetarium.

The current featured exhibit, Sun, Earth, and Universe would appeal to all ages. Permanent exhibits include the Discovery Room with display cases and an ‘engineering station’, the Tot Spot for ages 5 and under, and the Main Hall exhibits which include everything from brain teasers to opportunities to learn about the human body, from environmental science to experiments with motion.

I’ve clustered the exhibits by general theme – they’re not necessarily grouped together this way in the museum space.

These are all interactive, large motor experiences, which kids like my 8 year old boy will gleefully play over and over again! And as they play, they are learning some fundamentals about gravity, force, and other scientific principles.

There’s a Bernoulli blower, where fans create columns of air that you can float a beach ball on. The infrared camera is fun to move around in front of and notice the heat patterns in your body. With the pendulums, when you give this a spin, you see all the different pendulums sway back and forth in response to the movement. In racing the downhill racers, kids observe how weight and shape affect speed on the hill. I really liked the giant Archimedes screw which lifted balls up the inclined plane from the bucket at the bottom up to the top. We haven’t seen this elsewhere and it was fun to play with. Lots of science museums and children’s museums have ball walls (as they should – these are GREAT for teaching engineering process of design, test, tweak) and this is a good one, plus it has the added bonus of having a mechanism for launching the ball – you put it in the tube, and a fan pushes it to the top, where it tumbles down, then enters the top of the ball wall in an unpredictable location. 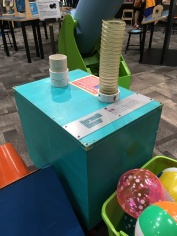 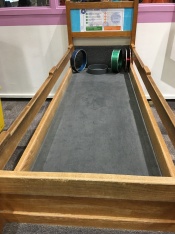 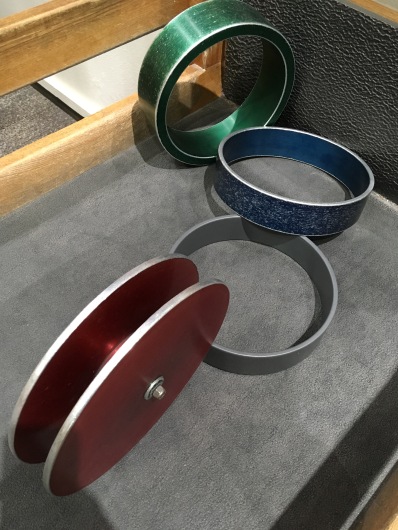 The Recyclotron was a fun interactive kinetic sculpture, where as balls roll down, at three points (red light, yellow light, green light) you can press a button to tell the switch whether to sort the ball toward the trash or toward the recycling. The interpretive sign recommends making environmentally sound choices about resources from the Earth. Of course when you’re actually pressing the buttons, it’s fun to test out all the options.

Another fun motion experience is the Gravitram, a kinetic sculpture. Once you turn it on, it just runs and you observe as it lifts the balls to the top and they roll down multiple pathways. These are always fun to watch.

Learning about the Human Body

They had concussion goggles you could wear that were supposed to simulate the visual distortion you may experience after a concussion (they didn’t do much for me…), a brain puzzle to piece together, models of muscles to explore. There was a chin-up challenge and a high jump challenge. 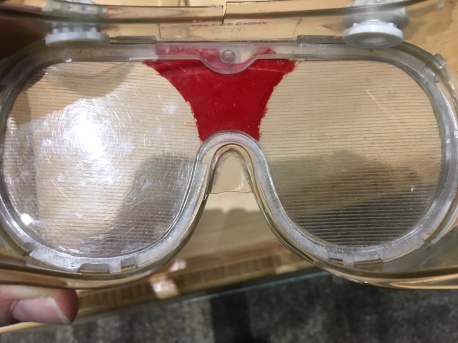 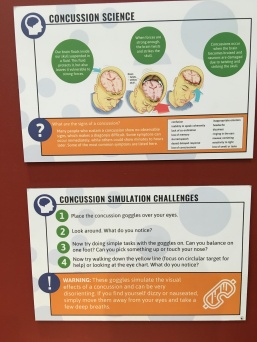 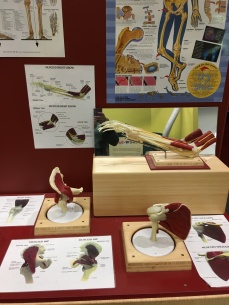 There was a fun pinball machine style exhibit which simulated the sun launching photons at solar cells to create electricity. It’s basically pinball, so super fun for my son.

The water filtration demo was educational, but less exciting. I really liked the wind turbines exhibit, where you had a choice of five different shapes of blades for your wind turbine, and there were two rotors side by side that you could attach the blades to, then run the fan to make wind, and see which design spun more quickly (i.e. was more efficient at capturing the wind energy.) Some would barely spin, others were very responsive. In an exhibit called Landscapes and Watersheds, which is reminiscent of one at Mobius Science Center in Spokane,  you could sculpt sand into mountains and valleys, then when you held your hand over it, a sensor would follow where your hand was, and pour over that area blue light to represent water or red light to represent lava. This exhibit is still in development, and visitors couldn’t quite figure out how to make it work well for them. (The Kinect sensor has a “sweet spot” where for some people they need to float their hand near the sand, and those with bigger hands need to be nearer the sensor – it’s tricky to find the right spot.) 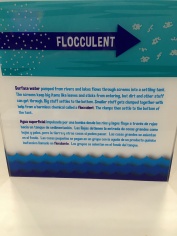 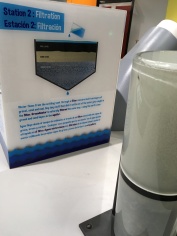 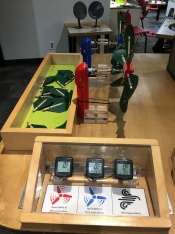 They had pieces from the Nano exhibit from NISE Net. This exhibit is designed to teach about nanotechnology. I have seen this exhibit elsewhere (including Palouse in Pullman), and although kids enjoy exploring the activities in the exhibit, personally I think the most kids takeaway from it is “nano means very small.” They only had some of the exhibit out on the floor.

They had a collection of brain teasers to try out. These are for the tween to adult crowd. 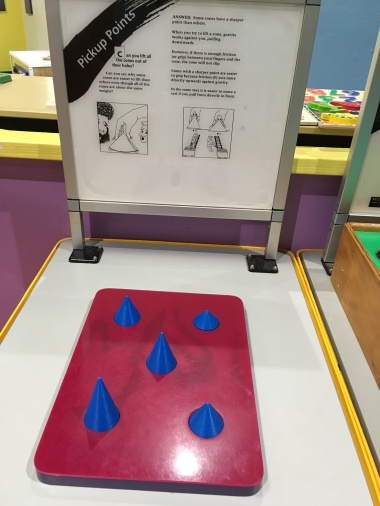 This was for the 5 and under crowd. The plus side: LOTS of fun hands-on activities with lots of replay value that would make it worth coming again and again with your little one. The downside: too much in a small space – hard to move around, and it felt cluttery. It would help to have a bigger space or less stuff.

They’ve got a puppet zone, Duplos, magnetic gears, blocks, puzzles, books, a well-loved train table, a ship to play inside, plastic stepping stones, and some random toys. And they had this gear track. 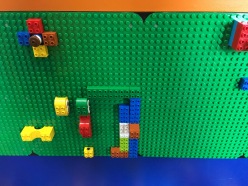 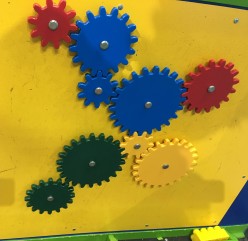 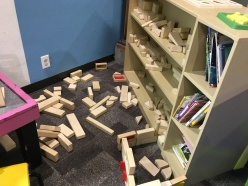 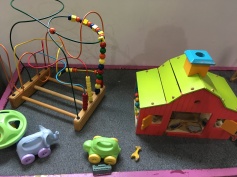 They had these cool x-rays, where one side was a photo of an animal and the other was an x-ray image of that same animal’s skeleton – you could look at the picture, then lay it on the light table, and the skeleton image would show through. I’d love to have some of these and have only found a few similar products here and here.)

My favorite was this table with geometric shape blocks on it that was basically like an air hockey table where you turned on a fan and the blocks floated around the table.

In a review, a visitor said about the Tot Spot: “but these are just toys and puzzles, not science exhibits.” Although this may not have been that reviewer’s meaning, I do think some adults think that museums should be about learning facts. That’s “crystallized intelligence” and it is important (though it becomes less important to memorize facts when we all have wikipedia in our pocket). But young children don’t need to learn science facts yet. But we do want them to experience science. Have hands-on multi-sensory experiences that build science process skills. Lots of the hands-on experiences at science museums are about this experiential learning that builds “flexible intelligence” and teaches children things like spatial awareness, the engineering method of build-test-tweak, gravity, and more.

The website says there is an “engineering station with numerous design challenges”. On the day we were there, it was Keva blocks. The website also says: “Soon to be added will be self-guided science experiments packaged within numerous discovery kits!” 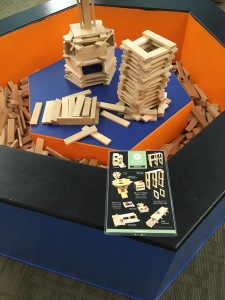 Around the discovery room, there were display cases of rocks, skeletons, eggs, and shells. 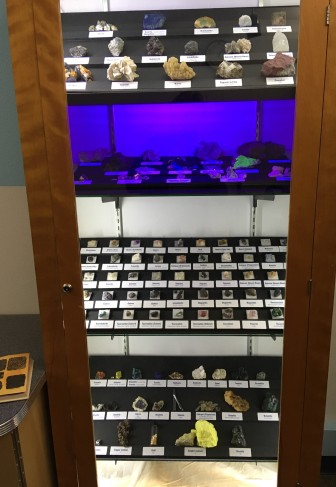 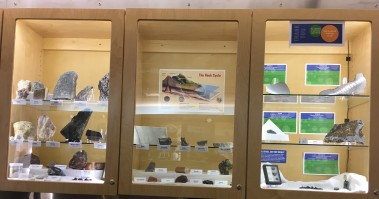 These were nice materials, nicely displayed, but more needs to be done to make them engaging. I liked that they had a field guide to rocks book on the shelf by one of the rock displays. In some of the cabinets, they had some great interpretive signs. But they were posted way up high, and they were small… I didn’t even notice them on my first pass through the room. Making larger versions of these signs and putting them down on the counter would help to engage everyone, especially the kids who are too short to see the current signs. And speaking of short, they could consider having some kind of step stool (like a kitchen helper) that the kids could use to get up to see the display cases. They could also make up worksheets – something like scavenger hunts – can you find a ___, or “what’s the biggest egg? what’s the smallest?” or “how are nutria’s teeth different from a deer’s teeth? Why?” 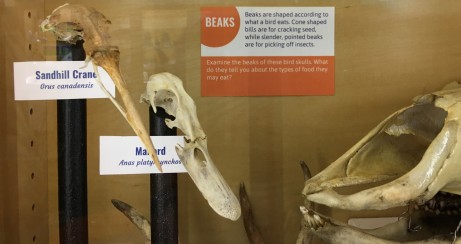 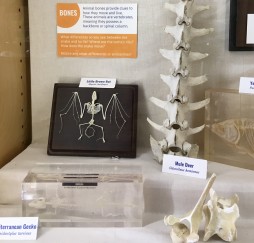 In the main hall, there’s display cases with butterflies and skeletons of coyote, a nutria, and a beaver. Similar activities would make these more engaging.

The exhibit includes posters with facts about the planets; information about the chances of finding sentient life in the universe; and a chance to try out equipment to detect the invisible – using infrared, ultraviolet, magnetic fields, microscopes on cartridges to reveal unseen info. My favorite part is the build a spaceship project – you assemble cardboard pieces that represent power, communication, navigation and science options, then you test it to see if it could withstand space travel and landing. My son decided to arrange the blocks to create a representation of Venus’ surface elevation – this took a long time and a lot of concentration, but he was very pleased with the result. 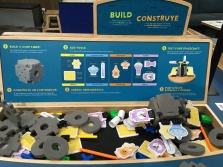 They have one of the largest and most technically advanced planetariums in the Pacific Northwest, upgraded in August 2018 with new state-of-the-art, laser-phosphor technology. Every day at noon they present a “Stargazing Tonight” show, they offer Pre-K Stories in the Stars on Fridays and Saturdays, and several other planetarium shows. (Learn more here.) We saw Earth, Moon, and Sun, and it was quite well done.

For laser shows (find descriptions here), we saw Lasers in Space, and it was educational for the adults and the kids, and also entertaining for both, with “brain breaks” of laser lights set to catchy nerd music (Tom Lehrer and They Might Be Giants included!)

Admission is cheap, at $5 for age 3 – 61. Adding on planetarium shows or laser shows is about $5 more. They are closed  Mondays, and on days when there’s a U of O football home game. (They make a lot of money on renting out their parking lot to tailgaters on game days.) For details on hours and pricing, check their website. They are also part of the ASTC reciprocal network, so if you have a science museum membership elsewhere, you may get in free. There’s a vending machine or you can bring in your own food to eat in their community room.

They have special sensory sensitive evenings, and other accommodations for autistic children or adults, including a museum story, noise reduction headphones, sunglasses, fidgets, and weighted lap pads. Learn more: https://eugenesciencecenter.org/sensoryhours/

We visited ScienceWorks as part of our “Road Trip of Science.” You can learn more about other science and engineering related museums we’ve visited in the Destinations section of this blog.

Other attractions in Eugene that we didn’t have a chance to check out: Museum of Natural and Cultural History and Adventure Children’s Museum.