In the spring quarter of our STE(A)M Enrichment class, we study biology, but because we’re the Family INVENTOR’S Lab, we also talk about how human beings get inspiration for inventions by studying plants and animal adaptations. That culminates in our Robot unit. Read the full Robot Lesson Plan for all of our hands-on activities, a scribble-bot project, book recommendations and more.

We build model robots out of materials from the recycling bin and craft supplies. Then we add on to them components we used in previous classes. Here’s how you can make a robot project.

Find body parts: cardboard boxes big and small – for arms and legs, I like long rectangles or tubes like toothpaste boxes, toilet paper tubes, paper towel tubes. For bodies and heads, try yogurt cups, cottage cheese tubs, plastic cups, metal cans – anything works. Build the body – you can attach things with tape or glue (we use Tacky glue for all our projects), but it’s even more fun to attach them in ways they can still move, like punching holes and fastening things together with brads, or tying strings to fasten them together. Or you could use MakeDo screws to assemble the cardboard. One of our students used retractor badge clips for arms.

Then decorate it. You could spray it with silver spray paint, or cover it in aluminum foil, or paint on silver paint. You can add buttons or fake gems for buttons to press, or dials from plastic lids to turn, or binder clip switches to flip. Googly eyes and a pipe cleaner smile can give the robot some personality.

Here’s a robot made by my co-teacher Monisha.

Here are some robots our students have made. 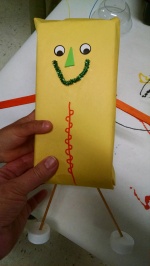 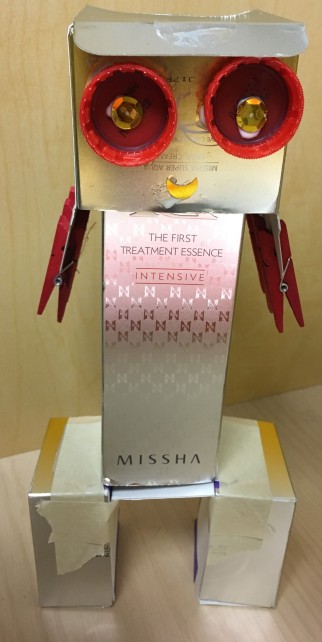 To build a robot, kids will use some of the engineering skills they learned when they built towers and strong structures. Sometimes an initial design requires refinement, like this robot who started with two triangular legs, but kept falling over forwards, so we turned him into a tripod. 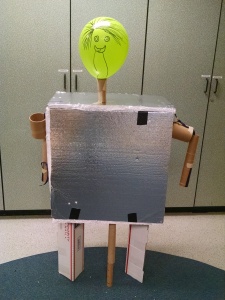 To inspire kids’ designs, you may want to show them pictures of robots from TV, movies, or books. Check out these from Scott Park and Daniel Nyari. Or, here is one I compiled from online images. 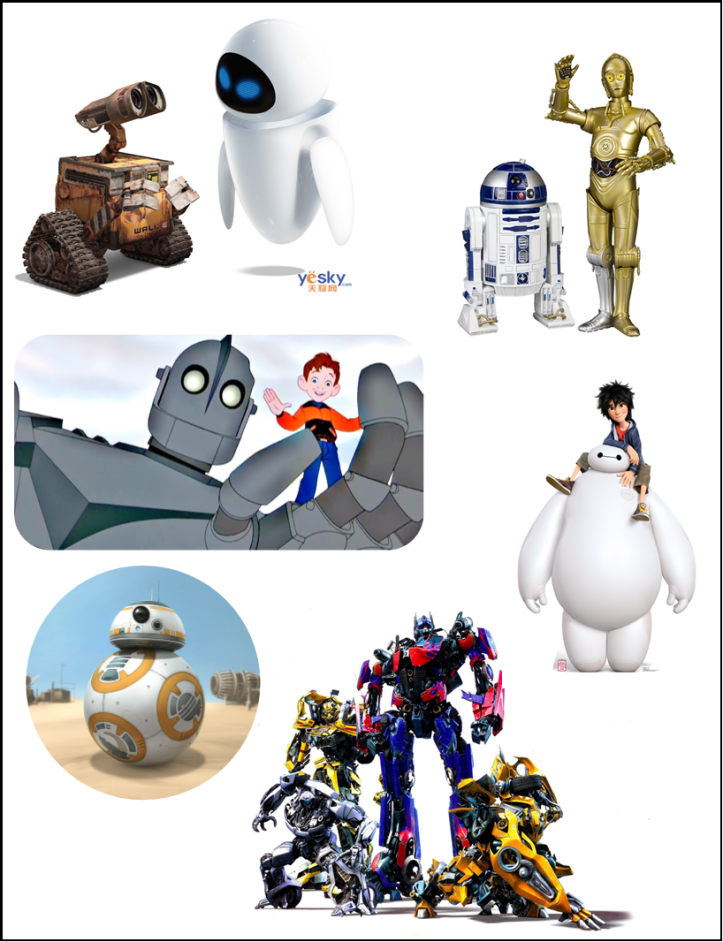 Once we’ve got the base robot built, then we challenge kids to incorporate ideas and materials remaining from other projects we did this year.

Many kids incorporated a design element from a previous class, the robotic finger, to make arms for their robots so their robots could give hugs.

Some kids have added Wheel and Axles, which we learned about in Simple Machines. (You could also add a spinner dial to the robot, using the game spinner idea from wheels week.) I think you could also do some fun stuff with pulleys. (And of course lots of articulated limbs would function as levers.) Or you could put a spinning anemometer on the top of the robot’s head. 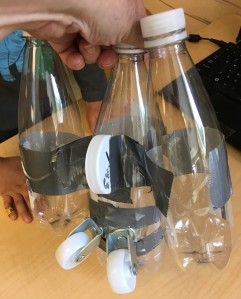 You could use  coin batteries

and LED Lights to add lights to the robot. (We used some in making our light-up cards in electricity week.)

At the Children’s Museum of Phoenix, they made “eyes” for a robot by cutting slits in the tub, sliding in coin batteries

, then using the “legs” of  LED Lights to straddle the battery, so one side is on the positive side of the battery and one on the negative.

You could also use a motor. (We used some in our scribble-bot projects.) My favorite robot ever from our class is this Mars Rover made by a kid and dad team. Notice the rolling wheels, and the motor that turns the red disc.

If you happen to own Snap Circuits or littleBits, I think you could do some really fun things of having a sensor (light sensor, sound sensor or switch) that connected to an actuator (motor), a buzzer, or a light. Our definition of a robot is that they have to have a sensor, a processor, and an actuator, so incorporating a sensor would get us closer to being a “real” robot.

This is a fun parent-child project, where you can help inspire them to keep adding new decor and new functionality to it. Getting them to use their imaginations helps guide the design. Try asking questions like:

What will you and your child make?