Safety Note: pulleys should always be used under adult supervision, because anything involving ropes creates a possible strangulation risk.

Kids LOVE to play with pulleys! Even just the simplest pulley system can provide on-going enjoyment. In this post, I cover basic pulleys to advanced pulley systems with lots of ideas for intermixing play with the hands-on science experience. Pulleys are also great for building motor skills.

If you prefer your information in text form, read below. If you like videos, all the info in this post is covered in the video at the top of the post.

For pulleys, you could use utility pulleys like these

Raises a load from down low to somewhere up high. Tie a pulley up high next to some place a child can safely stand, like a slide platform, a stair landing, or a tree house. Tie one end of your rope onto your load, then throw the rope up and over the pulley. From down below, someone pulls on the loose end of the rope to lift up a bucket. These systems are super easy to set up.

The classic way to play with a fixed pulley is for one person to be on the ground, and use it to raise things up high to another person. (Like raising stuffed animals up to your friends on the slide platform so they can then send them back down the slide to you!) You could attached the fixed pulley to a slide platform or a balcony. 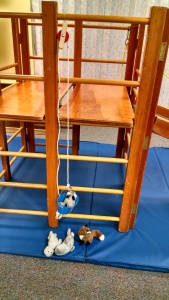 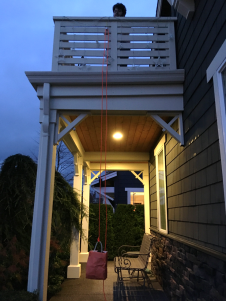 Other uses: attach a sheet and raise it up then stretch it out to form the wall of a fort. You can raise a bucket full of water that you’ve punched some holes in, and it’s a sprinkler! You can set up a bucket at the bottom of your stairs where as the day goes on things that need to go back upstairs get tucked in it, and then when someone goes upstairs, they haul the bucket up and unload it.

Here are pictures from some fun posts about how parents added fixed pulley play to their backyards for hours of fun for their kids: https://innovationkidslab.com/backyard-pulley-engineering-kids/; http://happyhooligans.ca/a-bucket-and-a-rope/; and http://littlebinsforlittlehands.com/homemade-outdoor-pulley-play-idea-simple-machines/ One of the authors points out that even though it doesn’t really “accomplish” anything to fill a bucket and raise it up in the air, and even though it’s the same every time, kids will do it over and over and over. 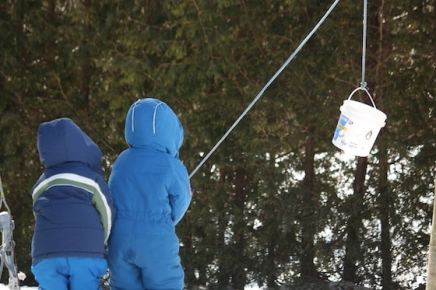 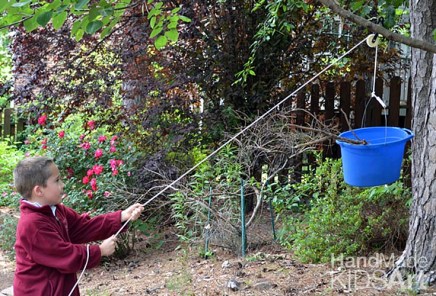 You can stand somewhere high, and use the rope and pulley to bring something up to you. (This is good for kids who are playing alone. They can go down, load the supplies, climb back up, and pull the load up to them.) Tie one end of the rope up high, loop it down around a pulley, and back up again. Attach load to the pulley.

Can move a load over and up (horizontally and vertically.) Requires two pulleys – it’s basically a combination of a moveable and a fixed pulley. Tie the rope up high,  then run the rope down through pulley #1 that has a load attached to it, then up through pulley #2, then down to the ground. You stand down low, and pull down to lift the load up.

Here, we anchored one end of the rope to a nail on the wall, then ran it through the bucket handle (we cheated a bit by using the handle as the movable “pulley”) then up over a spool.

With this next one, we used four pulleys, and a lot of rope. We set outs up on a PVC frame, but you could do a similar thing on a tree branch or a playground structure. Tie one end of the rope to your frame, then thread it down through a movable pulley attached to the load, up to a fixed pulley, down to another moveable pulley, up to a fixed pulley, then leave the loose end hanging down. When you pull down on it, the bucket is lifted high. With four pulleys, kids can lift a load that’s four times heavier than they could lift on their own! 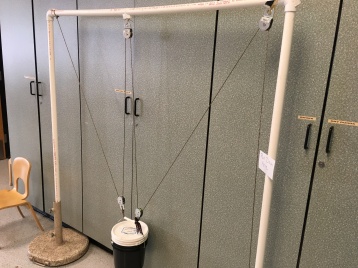 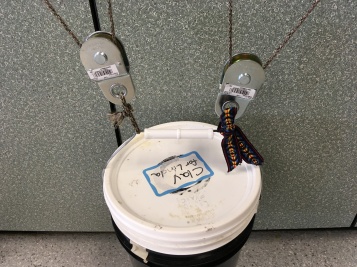 We had a very heavy bag of sand one year and a bucket of clay another. (Goal is for it to be heavy enough that our 5 year olds could barely lift it off the ground on their own.) When we put it in the bucket on the system, it was easy-peasy for them to lift it all the way up. (We learned we had to tell them to then carefully lower it to the ground, not just let go and let it drop.)

There are lots of variants on block and tackle. They use multiple pulleys (and lots of rope). They make it possible to lift heavier things. If you have two pulleys, it takes half as much work to lift something. With four pulleys, it’s one quarter the work. For the simple version, anchor a pulley. Tie the rope to the bottom of it. Run the rope down around pulley #2, then up around pulley #1. Pull down to lift the load up.

A basket on a track

This is a variant on the fixed pulley, where you can get vertical and horizontal movement, as the basket travels up a slanted track, shown in brown.

First, set up the track. Run the track cord through a pulley with a load mounted on it (or through the handle of a bucket if you don’t have enough pulleys.) Then tie both ends of the cord to be your track. It MUST be taut! And be sure your bucket can slide easily up and down the cord.

Then tie a pulley at the top of the track. Put a rope over the pulley. Tie one end of it to you load, and leave the other end hanging down. When you pull down on the rope, the bucket goes up the cord. This is the hardest pulley system to set up and make work well. For extra challenge: if the basket is heavy enough, then when the child lets go of the rope, the basket slides back down to the bottom of the track ready to be loaded. It takes a lot of tinkering to get that to work just right. If it’s not heavy enough, the kid on the ground may need to pull the basket back to the bottom by hand. 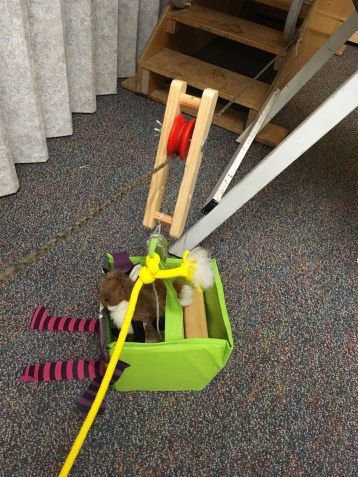 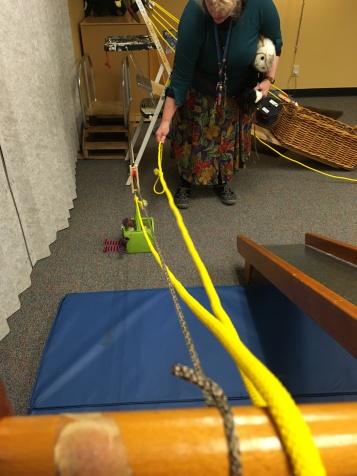 We used one of these pulley systems on Halloween 2020 to provide socially distanced candy delivery to trick or treaters. We were standing up on the balcony, and could clip an item on a pulley and send it down to the child, then pull on the rope to bring it back up. 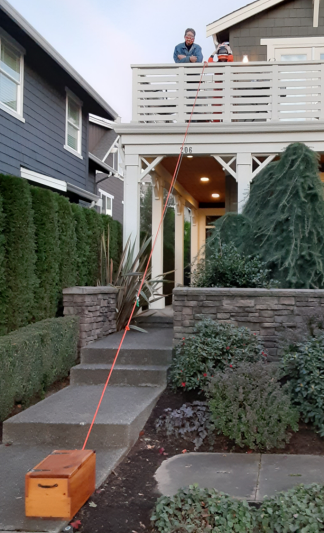 Send a load back and forth along the track. Requires two pulleys. Attach pulleys to anchor points. Take a rope and wrap it around both pulleys, then tie it, making one big loop. Clip things on with clothespins, or tie a bag, basket or other container onto it. Then you pull on one side or the other to bring the basket from one end to the other. Challenge: The rope must be perfectly taut for this to work! If it sags, it falls off of the pulleys. (And if it’s really tight, it’s hard for the kids to get it moving.) 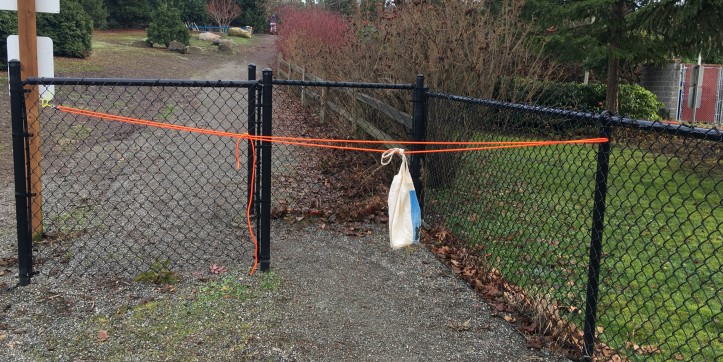 If possible anchor one end on something you can move back to make the rope tighter (like a bed and a chair, as shown below). If you’re anchoring it between two immovable objects (like two trees or two parts of a fence), expect to spend quite a while (10 minutes?) on tinkering  as you set it up to get it just right. 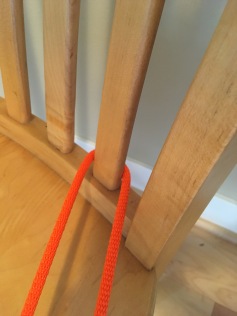 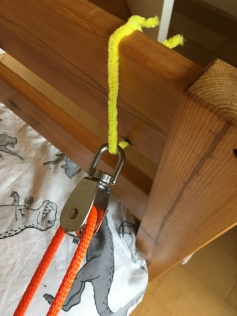 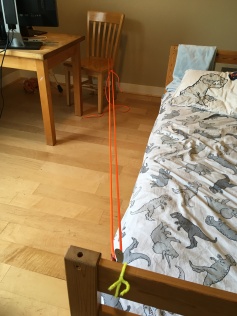 In this picture, we just had a clothesline that ran between a slide platform and a hook on the wall so kids could only interact with one end of it. It’s much more fun to set it up someplace where kids can access both ends of it. They can write a message, clip it on and send it to their other child, who can write a reply and send it back. 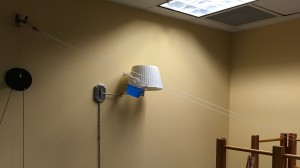 Safety note: be sure not to set up clotheslines and basket-on-a-track system in high traffic areas where kids will run into them and “clothesline” themselves around the neck.

You can also set up a clothesline vertically, then you can attach a flag to the rope and use the pulley to raise it.

Pulleys are great large motor activities. Pulling down on the ropes builds shoulder and arm strength. Running up and down to load and empty the bucket gives them a great workout. Kids also learn the hand-over-hand skill. At first, many children will start pulling the rope and keep backing up and backing up to raise the load. You can teach them how to stand in one place, grab with their left hand and pull back, and then grab with their right hand and pull back. They learn they can’t let go with one hand until the other hand has hold of the rope. They also learn they can use hand-over-hand to slowly lower a load so it doesn’t crash down.

In my STEM enrichment class for kids, we study all the simple machines. You can learn about the science of pulleys and all our activities in my full post on pulleys. Here are our other lessons for Simple Machines: Overview of Simple Machines, Inclined Plane, Lever, Wedge, Screw, Wheel and Axle.

Note: the links to pulleys and rope are Amazon Affiliate links, and I do get a small referral fee if you click through and purchase anything.