Note: There is an updated version of this post at: https://inventorsoftomorrow.com/2016/11/01/cars-engineering-for-kids/

After we studied all the Simple Machines, we spent a day looking at a complex machine: the car.

Illustrating the concept: I made up posters, one titled “A Car is a Complex Machine – made up of lots of simple machines” and the other “Simple Machines that are Used with Cars, Trucks, and Buses.” I have photos of a number of examples, and next to each one, a diagram of the simple machine it represents. You can see a sample poster here… note that I do not hold copyright to any of the images used here and am not authorized to distribute this poster… but you could make your own!

Books: I didn’t find any books that were specifically about the relationship between cars and simple machines, but there are lots of great car books. In our opening circle, we read “If I Built a Car

” by van Dusen. This is a very fun read-aloud fantasy about a child designing and building a fabulous car: “I’ll show you inside. I’ve put in a couch. It’s comfy and wide. Plus a fireplace, fish tank, and here’s something cool – The floor can slide open, and look – there’s a pool!” Great retro styling on the car, with chrome and fins.

We also read “Pete the Cat: The Wheels on the Bus“, because who can resist such a great combination? I would also highly recommend Going Places, described in my Books about Inventors recommendations. A good option for toddlers is My Car

by Byron Barton and for preschoolers, check out Cool Cars

by Mitton and Parker and Cars Galore

by Stein, Four to five year olds like Richard Scarry’s Cars and Trucks and Things That Go

For awareness of other cultures, read Galimoto by Williams and Stock, which tells the story of a young boy in Malawi Africa, who wants to build a galimoto – a word that means car, but it’s also the name of push-toys made by children. The boy has a box with all his possessions – a ball of plastic bags tied with strings, a knife made from a tin can, and a puppet made from cornstalks. He has a few pieces of wire. Throughout the story, he scavenges, scrounges, and trades for other small bits and snippets of wire till he has enough to make a wire toy car to race with his friends.

Build a car: We asked all the parents to bring in big cardboard boxes from home. We made cars by adding black paper plates for wheels (fastened on with brads/paper fasteners so they can turn), straps so they could wear them over their shoulders and a variety of decorations. This is not something the kids can do independently but it’s a great project for collaboration between adults and kids, and there’s a certain thrill in building something really big to take home. (Click on picture for bigger view.)

A fun little detail about the cars: we bought some of this reflective tape

and cut it up for headlights and tail lights, and look what happens when  you take a picture with a flash.

We added shoulder straps so the kids could “wear” their cars. I got the idea from Pinterest, but the posts I saw were missing a key detail on how to make the straps work: they either need to cross in the back (each strap goes from one side on the front to the other side on the back) or even better, you can have a strap on each side, and then tie them together in the center. This helps hold it on the child’s shoulder… the girl in this picture wore her car around for an hour!

Race a car: We set out blocks, black foam core boards, toy cars, and a yard stick. Kids could build ramps, race cars down them, and measure how far their cars went. They could notice whether the distance travelled was affected by how steep the ramp was.

Process art: We put paper on a table, then poured three blobs of paint on the table, and added three “monster trucks” from McDonald’s Happy Meal toys that had big treads on the tires. These are the kind of car that you pull back on and they roll forward on their own. We put toilet paper roll bumpers all around the table so they wouldn’t be constantly flying off the table. (None ever actually left the table with this set-up) This was a big hit with our 2 to 4-year-old boys. 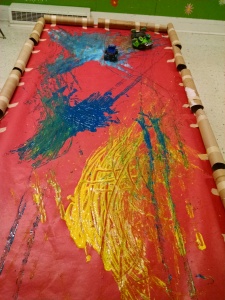 We had coloring pages with pictures of cars, and we also put several large pieces of craft paper out on the floor with markers, so they could draw their own roads and cities to drive their cars through.

Product art: We had cut out shapes from paper so children could assemble a car collage out of geometric shapes. We got wooden cars from Discount School supply and painted them with metallic paints. At ~$2 a car, this is a pricier project than we usually do, but it was nice for them to be able to make something that they could roll around.

Building a Car that Moves: Addendum…. The next year, instead of just decorating cars, we had the kids BUILD cars that could move. Learn more here.

Free play: We filled the sensory table with sand and toy cars to drive around in it. We had a steering wheel and set of brake/gas pedals that had come with a video game driving simulator, and we set those up on a table for pretend driving play. We have a large rug with a road drawn on it, so we put out cars for them to drive around.

Outside time: I took the older kids on a hike through the woods, where they had a trail map. We learned how to read the map and practiced following directions. For the little one’s hike, we talked about left hands and right hands, and followed directions to turn left or turn right.

Circle time – the Drive-In Movie. All the kids brought their cardboard cars over to circle time, and we watched a movie. I had edited down 12 minute versions of each of these, so we could watch the whole thing. The little kids watched Sid the Science Kid episode #125, “Climb Ignatz”, which is a review of simple machines. The big kids watched Bill Nye the Science Guy’s Simple Machines episode.