There’s an updated version of this post at https://inventorsoftomorrow.com/2017/01/17/rainbow-science-for-kids/

At today’s Family Inventors Lab, our theme was Rainbows. We also did this theme last year, so this post is a combination of ideas from last year and this year.

Group Art: Last year, we had a painting of a rainbow on the wall, then had a black and white line drawing of a rainbow below that they painted in to match the one on the top. (see photo above)  This year, we offered a drawing of a rainbow and colorful post-it flags to fill it in. (They’re a good small motor skill. Buy them at a dollar store, don’t pay office supply prices!) It was easier set-up and clean-up, but not as satisfying a project, so next time we’ll go back to painting. 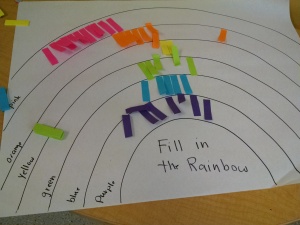 Challenge Activity: Build a spectroscope. This idea, and the photo below are from http://buggyandbuddy.com/homemade-spectroscope/. Check their post for the details.

Prep: Cut 45 degree slits at the bottom of each paper towel tube and cut a small peephole in each, opposite the lowest point on the slit.
Kids make: Kids decorate tubes with washi tape. Insert CD with shiny side pointing up.
Kids use: Look through the peephole – aim top of tube toward light, adjust till you see rainbows. It was interesting, because the effect was a little different in different tubes, presumably depending on the exact angle of the CD’s tilt, and the exact placement of the peephole. Some were clearer rainbows, some were spots of the 6 colors.

(Note, in the original post, they taped cardboard circles with slits cut in them onto the top of the tube. I didn’t find this made a big difference in results, so we skipped this step.)

After class, I discovered these Rainbow-Scope Kits. We’ll try them out the next time we do this topic.

Exploration of Colors and Light: We had an overhead projector, so we set it up with our screen from last week’s Shadows class. We put out a wide variety of colorful items that could be set on the projector and seen up on the screen. We also had a top that kids could spin on the projector and see the spinning shadow. This activity was the big hit of morning class with three kids virtually never walking away from it. (Sadly, the projector bulb died at the end of morning class, so our afternoon class didn’t get to try this one out.) 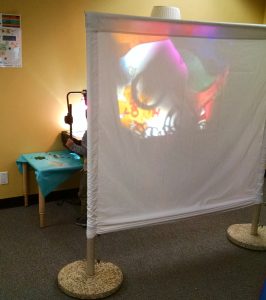 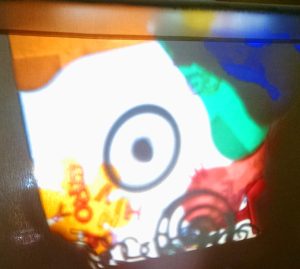 Exploration / Art: We had diffraction grating

peepholes. (When you hold these up to your eye, then look at a light, the light is broken up into rainbows. Different lights produce different patterns… ambient light may create spread out rainbow colors. Looking at a ceiling light, you might see circular rainbows, an LED flashlight on a cell phone, can create six rays of rainbows radiating out. Learn more about diffraction lenses.) We had crayons / markers and paper out so the kids could draw what they saw. We also put out some kaleidoscopes and some prism viewers for them to look through. This photo is a view of our overhead projector image from above, seen through the diffraction grating: 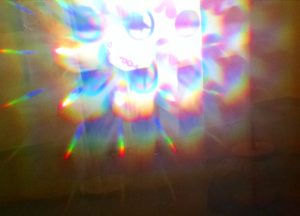 Exploration / Small Motor Skills: We “made it rain” by filling a big vase with water, spraying shaving cream on top, and using pipettes to drip diluted liquid watercolor

on the shaving cream clouds. It slowly drips through, creating swirling “rainfall” below. For more pictures and thoughts on talking to kids about the science of rain, check out this post. 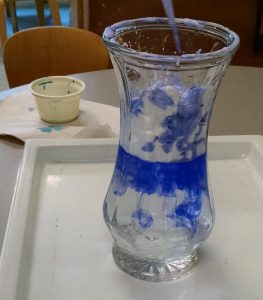 More Color and Light Exploration: We had jars of colored water and a bright light to shine through them. We rigged up a “mirror” with foil to reflect the light to “mix” colors. 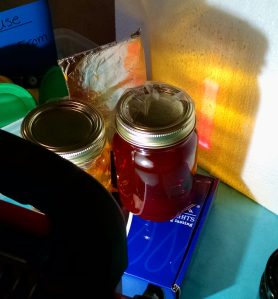 We put colorful translucent items on the light table.

Pattern-Making / Art: We had pipe cleaners and beads out and kids could choose to make a patterned bracelet, or choose to make rainbows on Styrofoam bases.

Writing tool: We made a rainbow tray, like in this Nurture store activity, with the intention of filling it with salt for kids to practice drawing letters in. But, we discovered we didn’t have salt in the classroom. We tried flour, which I’ve used successfully with one toddler but in the classroom setting with multiple kids, it was too messy. We tried white plastic beads (like you fill beanbags with) but they were too messy. We tried rock salt, but you couldn’t effectively trace letters in it. So, we’ll try again next time. 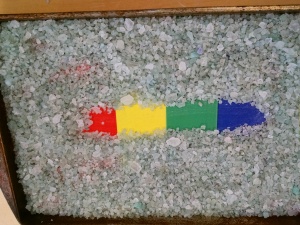 Rainbow Songs: There are so many songs about rainbows! I made a playlist of rainbow songs and we just had it playing in one room while kids played.

Other Ideas: Other activities this year and last were rainbow crayons

, rainbow colored blocks, and color your own playdough. (Last year we used liquid watercolor for this, which was not a good idea as it made the playdough too wet. We may try again in the future with gel or powdered color.) We had blocks of ice that they could sprinkle salt onto and pour water onto, and drip liquid watercolor on to help it melt. Even better would be to make rainbow colored blocks of ice. We also a rainbow colored tumbling mat with colored hoops to jump into for some big motor play. We played a little spontaneous Twister on the mats: Put your left hand on the red part, put your right foot on the blue part, and so on.

Gathering Song: For our gathering activity, I gave all the kids colorful scarves, and told them that when I called their color, they should wave their scarf, and when I said “rainbow”, everyone should wave their scarves. We practiced that, then I put on this song, and we waved our scarves. Note: it was hard for our little ones to keep up with the speed of this song, so another one from the playlist might work better if you’re working with 3 – 4 year olds. Try: www.youtube.com/watch?v=HQGA1_PR4Aw

Understanding the Big Idea: You could choose to show a simple video, such as this one or this one:

I just talked about rainbows, asking the kids questions – the older ones knew these answers: “To see a rainbow outside, you have to have a specific type of weather – what do you need?” We discussed sunlight and rain. Then I showed them the flashlight on my phone and asked what color the light was – white. I told them it was made of many colors, and if we could bend the light, we could see all those colors. We turned out the light, I held up a glass of water, and shone the flashlight through it to make a rainbow. (Note: be sure to test out a variety of glasses to see which gives the best rainbow effect – I had the best luck with a stemless wine glass, and shining my light through the curve at the bottom.) I also showed how the reflection off a CD can create a rainbow.

I asked the kids what colors are in a rainbow, and some could recite them easily, so we wrote those up on the board, and talk about the ROY G. BIV mnemonic.

Book: We read A Rainbow of My Own by Freeman. It’s a nice story of a boy who imagines having a rainbow follow him and play with him, but then his imaginary rainbow disappears, but when he goes home, he finds a “rainbow of his own” in his room as the sunlight shines through the goldfish bowl, creating a rainbow. It’s a sweet story, and our kids totally got that real rainbows don’t behave like his pretend one did, and they liked that it ended with the rainbow and the goldfish bowl, which echoes the demonstration we just did.

There’s some other nice song options on Preschool Express and on Perpetual Preschool, or on the YouTube playlist I mentioned earlier.

by Ehlert, about planting a colorful garden. It tied in nicely to this week’s rainbow theme and next week’s Seeds and Plants theme.

Then we got out the parachute (it’s rainbow colored) and played the song Somewhere Over the Rainbow by Israel Kamakawiwo’ole. We waved the parachute up and down gently with kids under it. We put balls on top of it and bounced it wildly, and we played Red Rover under it.

Rain Books. If you’re talking about rain as well as raindrops, here are some good options.

“>stream for a fee on Amazon, but I have not found a free version.

We always have more ideas than we have time and space for, but if you’d like more ideas for rainbow-themed activities, look on our Pinterest page: https://www.pinterest.com/bcparented/rain-and-rainbows/