There is an updated version of this post at: https://inventorsoftomorrow.com/2017/02/14/planets-and-space-travel/ 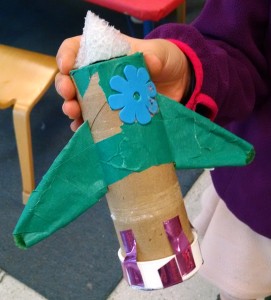 (Note: I don’t know the original source of this idea – it appears all over Pinterest – just search for “sun moon earth model” to see several samples.)

Martian surface. Kids could trace around a lid from a large tub to make a circle on cardstock, then paint it with Mars goo – paint mixed with flour. They could sculpt mountains and craters in the goo. We placed a photo of Mars (from this book) on the table as inspiration.

Jet Packs: A friend of ours recently made a more sophisticated (i.e. prettier) version of these. We simplified it down a bit for class. Take a plastic bottle (we used an OJ bottle). Fill with bits of poly-fill for “smoke”. Put the lid on, then tape crepe paper flames (or felt flames) to the bottom of it. Take bias tape or other strings. Lay them on one side of the bottle in an X shape and tape it on. Decorate, adding buttons and such. Then tie on by putting it on the child’s back, and crossing the ties across the chest.

You could also make jet packs or walkie talkies or other “space gear” by covering cardboard boxes with foil and decorating.

Solar System Crowns. Cut long strips of black card stock. Measure them to fit around a child’s head with a small gap in the back. Have kids cut out paper suns to glue in the center. Then glue 8 (or so… ) glass “stones” on to represent the planets. After the glue dries, punch holes in the ends of the band, and tie a string between them so the child can wear it as a crown. We used tacky glue for this project, which works but takes a long time to dry. A hot glue gun would be faster. (Read Teacher Tom’s thoughts on allowing young children to use hot glue guns.) Note that we had a poster of the solar system and a diagram of the solar system out for information and inspiration. 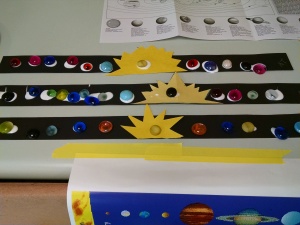 Comet Streamers: We put out wooden rings and plastic ribbon so they could tie on streamers and make a fun toy to run and play with.

Spin Art: We loosely tied this into the theme of spinning objects in space and to orbits, but really, we do spin art because it’s fun! Take a salad spinner. Cut a circle of paper or a paper plate to fit in the bottom. Drip on some paint on the paper (use a ketchup squirt bottle to make this easy). Close the lid and spin.

Creation Station: We always have a collage station available in the corner with lots of fun recycled materials, tape, and glue where kids can build anything they want. At the top of the post, you’ll see one student’s rocket ship that she created on a whim.

Melted Crayon Art: Next year, I’d like to have the kids do space backgrounds using melted crayon art (cover a griddle with foil, lay paper on top of the heated griddle, and draw with crayon – the wax melts on to the paper) and then add some planet art on top. The art inspiration is the book Going Around the Sun: Some Planetary Fun

, which I review here.

Snack – Kids make something that looks like planets. You could use English muffins split in half that they spread on whipped cream cheese and swirl in food colors. Or make pizza planets on the English muffin. Or decorate round sugar cookies with frosting.

Question of the Week: Each week, we post a Question of the Week (or more than one) on the board. I define the question this way: When the youngest child in the class walks out today, they should be able to answer this question in at least a basic way. Our questions this week were: What is a planet? What is a moon? What is a solar system? The very simple answers are: Planets are worlds that orbit (go around) a star, like our Sun. A moon is like a mini planet that orbits around other planets, like our moon orbits the Earth. A solar system is made up of all the planets and other things (moons, asteroids, comets and such) that go around a star.

Tool of the Week – Models: Each week we have a featured tool. This is often something we’re using in activities, such as a screwdriver, a hammer, or a magnifying glass. This week, in circle we wanted to talk about the idea of Models, and how scientists build models to better understand things:

Orbits: We used our Orbital Mechanics Wand we made in Gravity week to illustrate the basic idea of orbits, by spinning the small ball on a string around the large ball. 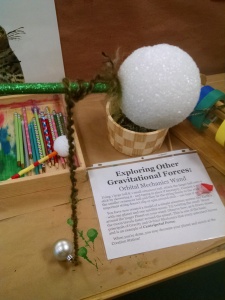 Lunar phases: We used a flashlight, a large Styrofoam ball and a small Styrofoam ball to demonstrate how the sun’s light (the flashlight) shines on the moon and what we can see from Earth. If you do this, here’s some recommendations: one – put a pushpin or something on the Earth to represent “where we’re standing.” First have a child just hold the flashlight shining at the earth. Rotate the Earth around to show whether it’s day or night where we’re standing. Then have another adult hold the moon and move that around the earth, and talk about what the moon looks like from where we’re standing. This is a tricky demo to manage the physical logistics of, so practice it in advance.

Solar System: We showed them an orrery – a 3-D model of the Solar system that shows relative sizes and orbits of the planets. Ours was this inexpensive kit

from Amazon – the dime is in the picture to give you a sense of scale (note: if you get one of these, be sure to pay very careful attention to which length of metal pin each planet gets mounted on – if you get it wrong, it’s hard for them to orbit past it each other properly.)  This is for display only, as it tends to fall apart if three year olds pick it up and turn it upside down.

We talked some about the planets of the solar system.

And we talked some about space travel – we’d planned to read a book on space travel, but circle was already too long, and we wanted to get them playing hands-on again!

Rocket Ship: We set up a climber to be a rocket ship. We covered the mats in fabric to look more like a planet surface and less like blue gym mats. We set next to the climber an assortment of space helmets and a couple space suits (tabards with flattened aluminum pans on them.) They could also wear their jet packs. You could also put out technological looking toys here – like a telephone headset (headphones and mike), or joysticks, or computer keyboards for a “control room.” 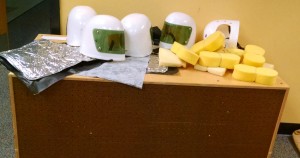 Moon Walking: We had large sponges (like you use to wash a car.) Rubber band them onto kids’ feet, then have them walk – it feels odd – maybe like ‘walking on the moon.’

Planet Models: I have some model planets I made of Model Magic long ago. I brought them along for hands-on experiences during closing circle. They’re little (notice the dime for scale) and squishable so I had to tell the kids to be careful holding them and modeled how to hold them in their open palms, not squeezing them between fingers. 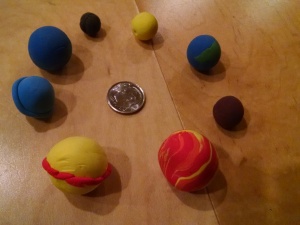 Book: We read Space Walk by Yoon, a nice simple lift-the-flap overview of the solar system with basic rhymes about each planet. In the morning class, we had some kids missing due to illness, so we happened to have exactly 8 kids. I gave each a clay planet. When it came to “their page” in the book, they showed everyone their clay planet, then gave it to me, then lifted the flap to learn about the planet. (In the afternoon class, we had more kids than planets, so did NOT hand out planets to anyone.)

Planet exploration: We used the orrery and the clay planets to talk about each planet – which is biggest – which is smallest – which is closest to the sun – which would be hottest – or coldest – which have rings. This is just to practice observation and categorization.

Song: I taught Zoom Zoom Zoom. Here are the lyrics (and here’s a video of librarians teaching the song.)

Dance Party: We got the comet streamers we’d made out (and we had extras for anyone who didn’t make one. We put on this YouTube video and danced around, singing along and waving our comet streamers.  The video adds in this chorus: We can have a party on the stars with Mercury, Venus, Earth, and Mars. Jupiter might just sing a tune, with Saturn, Uranus and Neptune. 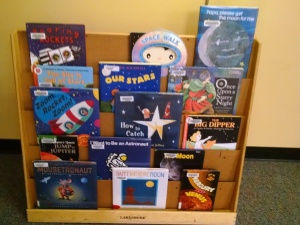 As always, I’ll give affiliate links for the books I recommend – the link allows you to easily go to Amazon, learn more and read reviews. (If you buy anything, I receive a small referral fee. But really, I recommend that you get books from your local library whenever possible!)

There are many series of non-fiction books about planets, all of which have 8 books, with titles like “The Moon” or “Jump to Jupiter” or “Ringed Giant – the planet Saturn.” Go to your library and flip through them and see which series is best for your audience.

Take-Home Activity: We sent home a copy of this solar system mobile that kids could decorate, cut out and put together with parents’ help. (Note: making a mobile that balances is kind of an advanced engineering skill… )  It would be best to copy it on 11×17 card stock if that’s possible for you. There’s another solar system mobile here.

You would think there would be good planet-themed apps. I haven’t searched recently, but two years ago, when I had a three year old who was wild about the solar system, I searched and searched and didn’t find anything worth bothering with. If you have one you like, add a comment!

Videos are a whole different matter! There’s lots of good ones. My son loved:

And more… these are all toddler / preschool friendly songs about planets: